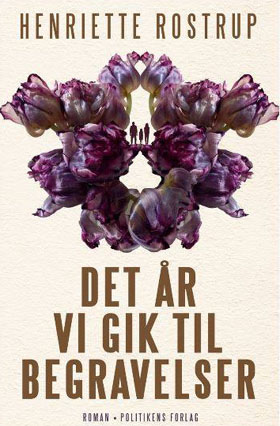 A Year of Funerals

Jewel Temper heads off to New York with vague dreams and no plan beyond simply being somewhere other than her home town. Her real name is Julie, and she grew up in small town Denmark.

She establishes herself as a ghostwriter for popular but burned-out authors, also writing about her own childhood memories, which were anything but picture-perfect. When she gets pregnant, she doesn’t tell the baby’s father. Instead she moves to a slightly shabby part of town full of colourful characters, where she grows especially close to Mr Velazquez, a transvestite who becomes a kind of one-stop-shop – mum, dad, grandma and granddad – for her and her daughter Nadia. After ten years in New York she receives a packet of letters from her now dead mother, who wrote them to her over the years but never sent them.

A Year of Funerals is about being homeless in your own family, about finding yourself in a new community and putt ing an end to running away from life. It is a wide-ranging and intricate tale of love, family and identity are forced to face traumas they have long repressed.

Henriette Rostrup was born in Copenhagen in 1970. She has a degree in Comparative Literature from University of Copenhagen, 1998. Since the late eighties she has lived, studied and worked in several places around the world: Copenhagen, Odense, Orléans, Boston and New York City. Having worked in Danish and international publishing for many years, among other things as literary agent in New York City, she quit her job in 2002 and started working freelance as a translator of fiction. In May 2007 Bazar Forlag published Henriette’s first collection of short stories Afkom / Off spring. The novel I dag og i morgen / Today and tomorrow was first published by Bazar and republished by Rosinante in 2010. The novel Skygger / Shadows was published by Rosinante 2011.